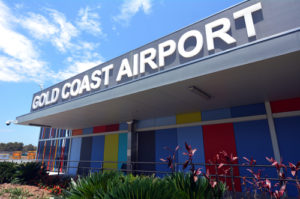 Quantum Sphere was contracted by Adco Constructions in early 2009 after an independent consultant recommended the building and infrastructure company go with an LG commercial solution, for the large-scale redevelopment of the old Coolangatta airport.

The Gold Coast International Airport was a ground-up redevelopment from the Queensland Airports Corporation, on a grand scale with a brand new terminal replacing the ageing facilities on the existing site. A major requirement was that the end result would be a high tech user-friendly facility at the cutting edge of innovation featuring the latest fast-refresh technology made by LG.

As the Preferred Commercial Supplier for LG Electronics in Australia, Quantum Sphere was tasked with supplying and delivering a variety of over 270 commercial-grade FIDS (Flight Information Display Screens) LCD televisions in 42″ and 32″ sizes, along with dozens of PC monitors, and wall mounts and ceiling brackets as well.

However, it was not just a case of supply to the site and wait until the models were needed. Sixteen delivery windows were specified over the life of the project, across the three construction phases ending in mid 2010, so that cost efficiencies could be maximised. Another challenge was that some adjustments were made to the model types and numbers needed as the project went on, so Quantum Sphere had to closely monitor stock levels and react quickly as requirements changed.

The company co-ordinated shipments from a number of different warehouse locations, all the while ensuring there was sufficient stock numbers on hand to fulfil the demands of each construction and
fit-out phase, within pre-determined time-frames.

Indicative of Quantum Sphere’s commitment to excellence was that in the final weeks of stage three, the company’s arranged to airfreight a small shipment of a newly specified FIDS television from one of LG’s factories in Korea, rather than take the chance that the freighter with stock for the Australian market would arrive a day or two late.

As it happened, the transport ship did end up docking later than expected, so Quantum Sphere’s rapidly deployed proactive solution really did help save the day.

“Quantum Sphere were professional from day one,” says (Luke Broadhurste, the (Project Manager of Adco Constructions. “There was no room for error in the timing of area by area fit-outs so the right equipment had to be delivered to the right place at the right time, and with quite a large number of different screen types and sizes going into the various parts of the terminal, that was a pretty tall order. Looking back, I shouldn’t have been as stressed as I was. Quantum Sphere did everything we wanted and more, with spot-on model delivery and excellent logistics support too.”

Successfully completing the terminal screens supply and delivery requirements at the new Gold Coast International Airport, led to Quantum Sphere being contracted again to do the same at three other regional airports in QLD.

“In this business, everything to do with a refurbishment is on a tight schedule with severe cost ceilings in place, so there’s no room for error,” explains (Luke Broadhurst . “So we always prefer to stick with organisation’s who keep their promises. Quantum Sphere has proved they can walk the talk, on time and on budget, and that’s why we’ll keep working with them.”